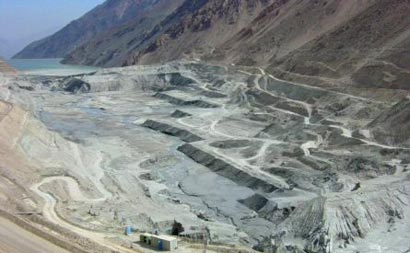 The mine had three tailings dams that needed to be moved for environmental reasons. Two of these deposits were located in a steep narrow valley with the third deposit being located on the side of a valley.

The use of hydraulic monitors was considered as the only economical option as blending of the coarse fraction with the middlings and fines allows pumping of the tailings. However, the tailings were mixed with rock deposited during the construction of the impoundment and the subsequent impoundment division to form road ways. A small amount of rock was deposited from avalanche scree from the steep valley sides. The rock was removed by mechanical methods that had to work in dry conditions. This posed a problem for the hydraulic operation which was solved by having two mining areas to allow mining, drying and then rock removal. Dredging of the material in the dams would have caused damage to the mechanical equipment and pumps, also dry load and haul was considerably more expensive than hydraulic mining.

A production rate of 19,000 tonnes per day over an 8 month annual cycle was required to make the operation a success. Mining during the winter months posed hazards from avalanches, blizzards and freezing of pipelines and mechanical equipment (Cuevas, Jansson et al.).

During the mining operation the screened material was pumped to a header tank almost 5 km away at a height elevation of 200 m. From the header tank the tailings were gravitational fed to a new tailings impoundment 50 km away. 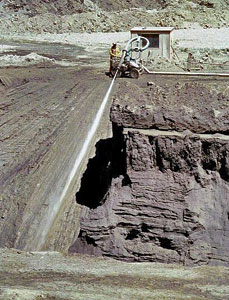