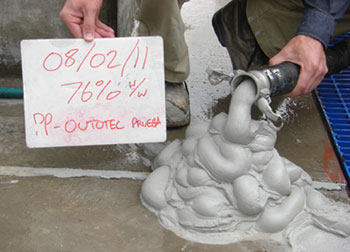 Over recent years there has been an increased demand to run pilot scale tailings trials either as part of metallurgy testing or on a semi-industrial scale normally located at an existing mining operation. These pilot plants are fundamentally focused on thickening trials to determine the ability to increase the solids concentration of the tailings towards or beyond paste while defining:

These larger pilot scale programmes normally follow from benchtop sedimentation and thickening trials to determine the ‘potential’ limits of thickening a particular type of tailings. Quite often the results from large scale pilot plants are different and provide an improved realistic approach to defining thickening limitations for a full scale operation.

Occasionally there are contractual obligations with vendors set out by mineral operators to ensure that any equipment performs as intended. Therefore it is in the interest of thickener vendors to promote pilot and demo plant trials to reduce operational risk and define an installed system with improved levels of confidence.

There are several types of pilot plant testing considered in tailings handling and storage facility design. These are summarised as follows:

With the requirement to reduce water consumption, some mines are looking at alternatives to maximise water recuperation from the tailings stream. Although paste and dry stacking essentially achieves this goal through thickening and filtration, the tailings properties themselves may physically limit the higher solids concentrations obtainable (e.g. thickener limitation, blinding of filter cloths with fines). For thickening, this can be determined through the thickener Limit Testing programmes as mentioned previously. However, now there is a trend where separation of a single tailings stream into two may recover more water, thus changing the properties (and volume) of the tailings that are later thickened or filtered, or a combination of both.

Traditionally hydrocyclones were integrated in tailings storage design to separate a single tailings stream to provide a coarse fraction of tailings to use as an embankment construction material, with the fines deposited within the containment area. This is still frequently practiced for conventional tailings storage utilising the crest cyclone or the hydraulic cell construction technique.

In recent times, the use of hydrocyclones has been considered in an effort to optimise thickening of tailings to higher solids concentrations. For example, the coarse fraction (underflow) produced by a series of hydrocyclones may have a high solids concentration beyond that feasible to be transported hydraulically. The natural low fines content of this coarse product therefore makes filtration attractive to recover more water and allow deposition in a dry stack style tailings storage facility. The overflow (fines) from the cyclones (the solids volume of which is usually less than the underflow produced) is therefore thickened to a high density and deposited in a containment facility. A further option is to recombine the coarse and thickened fines as a single tailings stream to be hydraulically or mechanically transported to the final storage area. These processes sound feasible, but many mineral operators and tailings designers need to consider the following:

Some of the benefits of tailings stream separation are as follows:

A detailed trade-off study investigating the feasibility of separation for a particular tailings type together with a series of handling options should be conducted. Any potential increase in water recovery needs to be assessed on a cost basis together with the associated capital and operational expenditure of operating hydrocyclones. Another important consideration is the risk associated with complicating an easier manageable single stream tailings discharge system. 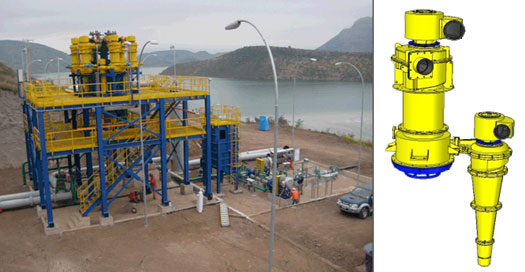 Based on the idea of separating the feeds, the first step is to determine the hydrocyclone splits. This can be achieved through computer modelling knowing a few basic parameters of the associated tailings, and later through metallurgical trials or an onsite pilot testing programme. These testing programmes can be integrated as part of any tailings pilot plant to improve the confidence that splitting the tailings into two streams may recover more water and reduce the reliance on thickening the full throughput of the processing plant.

The design of a pilot plant can be complex with an expectation from a mineral operator that the plant will operate as intended once construction has been completed. The reality is that it is a “pilot” and modifications need to be made to be able to operate the plant effectively and efficiently whilst being able to measure intended design/operational parameters easily and with a high degree of confidence. Tailings design consultants and mineral operators should consider a wide range of tests as part of any pilot plant design. For example, a pilot thickener trial that is focused on determining thickening limitations of a feed can easily incorporate flumes to assess beach slope variations using the underflow feed from the thickener. For a large thickener demo plant, a series of small hydrocyclones could be incorporated to assess the variations in thickener performance for different tailings gradings. The coarse fraction could be used in filtration trials or in a pipe loop (with thickened slimes) to determine the transportability of the two independent waste streams generated. The list goes on…