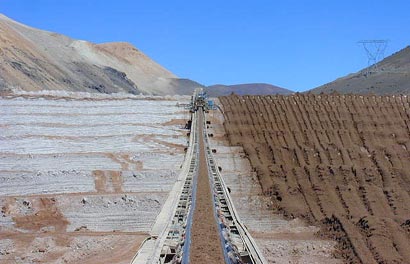 La Coipa, owned by Kinross, is located around 3800 m above sea level in the Atacama Desert, a very arid area of northern Chile. Snow fall is the prodominant form of precipitation in the winter months with freezing temperatures commonly occuring year round. Water sources at the mine are limited and filtered tailings were considered due to the economics and feasibility of the project. At present the La Coipa mine has the largest tailings dry stack (AMEC, 2008).

Dry stacking of tailings at La Coipa has been possible due to advancements in large capacity horizontal belt vacuum filters. The tailings (18,000t/d) are dewatered to contain <20% water content (depending on the specific gravity) allowing them to be either trucked or transported by conveyor to the disposal site. The conveyor system is mobile incorporating an advancing plough to allow the tailings to stack in lines in parallel con the conveyor (radial stack arrangement). The tailings are then spread out and compacted to increase the density of the stack. The distribution conveyor 'walks' over the dry stack forming the tailings layer. Typical layer thicknesses are 20 - 30 m.

For La Coipa, the following advantages were considered:

However, the following disadvantages were determined during the design stage: