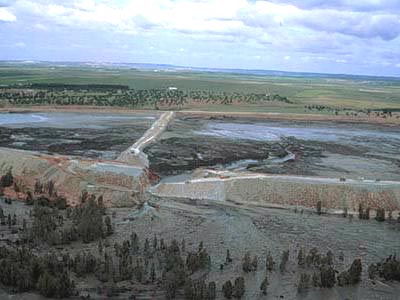 Figure A: The almost sealed embankment that failed at Los Frailes

Minas de Aznalcóllar is located near the town of Aznalcóllar in southwestern Spain and approximately 40 km west of the large city of Sevilla (Figure 1). It is within the Iberian Pyrite Belt which has a well known mining district for at least a few millennia. The minesite is drained by the Agrio and then Guadiamar Rivers. This river system extends to the south-southwest, under a road bridge near the town of Sanlúcar la Mayor, and into Doñana National Park.

The Aznalcóllar orebody was discovered in 1956 and brought into production in 1979 by Andaluza de Piritas, S.A. (Apirsa) owned by Banco Central S.A. (Eptisa, 1998). Boliden purchased Apirsa in 1987. A second orebody, named Los Frailes with more than 70 Mt of ore, was then discovered and was mined shortly after.

The tailings impoundment at the minesite is roughly rectangular in shape (Figure 2). The east and west sides are approximately 2 km long and the north and south sides are roughly 1 km long, enclosing 200 ha. Waste-rock dams are located on the north, east, and south sides, with a maximum height of 27 m. There is also a internal east-west dike which separates the "pyrite pond" section in the south from the "pyroclastic pond" section in the north (Eptisa, 1998).

Just before 1 AM on April 25, 1998, a power line near the dam toe had failed, signaling the start of the dam failure (Eptisa, 1998). Around 3 AM, an electrician inspecting the line noticed cracks in the dam crest and only a little ponded water in the pyroclastic section of the impoundment, indicating most of the tailings outflow occurred before 3 AM. A staff gauge near Sanlúcar la Mayor (Figures 1, 3, and 4) reported the peak water level at 3:30 AM. Outflow from the impoundment stopped around 8 AM, and the level at the downstream staff gauge fell until 6 PM when normal levels were attained.

The release of tailings solids and water occurred through a breach in the eastern side of the impoundment, at the southeast corner of the pyroclastic section (Figures 5 and 6). This was initiated by a failure in the dam along the pyrite section just to the south, which resulted in a 700-m-long section of dam, alluvium, and marl moving as much as 67 m laterally to the east with a maximum reduction in dam-crest elevation of 2.4 m. The breach was later enlarged by the water and solids flowing through it.

An estimated 1.5 Mm3 of tailings solids and 5.5 Mm3 of acidic tailings water (pH 2-4) were eventually lost (Eptisa, 1998). Approximately 300,000 m3 of the solids were deposited upstream of, and near, the dam breach, and the remainder flowed downstream into the Agrio and Guadiamar Rivers, covering 3500 ha of agricultural land (Robinson and Freeman, 1998). The thickness of lost tailings reached approximately 4 m near the minesite (Sassoon, 1998). The loss of tailings from the pyrite section was attributed primarily to liquefaction, whereas the pyroclastic-section loss was primarily from tailings-water erosion.

The Cause of the Failure

The 25-m-high dam rests on roughly 4 m of river-terrace alluvium (Figure 7), which is underlain by 70 m of blue marl (composed of roughly 25% carbonate). At a depth of approximately 10 m into the marl, overstressing of the marl beyond its peak strength by construction-induced pore pressures allowed the dam, alluvium, and shallow marl to slide along a near-horizontal bedding plane to the east (Eptisa, 1998). This resulted in liquefaction of the pyrite tailings, which in turn increased the loading on the dam as the foundation resistance was decreasing. These processes account for the 60 m horizontal displacement of the dam, which is considered unusually high. Other factors like earthquakes, blasting, acidic drainage, and seepage of groundwater have been ruled out as contributors to the dam failure.

Media attention and public reaction to the dam failure were rapid and intense (e.g., Robinson and Freeman, 1998; Sassoon, 1998). Boliden agreed to clean up the tailings extending downriver to the bridge near Sanlúcar la Mayor (Figure 4), and government agreed to clean up the section below that bridge. Hundreds of people, trucks, shovels, and other equipment were mobilized as quickly as possible, so that the tailings would be excavated and returned to the mine before the wet season began around October. A major reason for this rush was the metal-leaching and acid-generating nature of the high-sulphide tailings, which could significantly contaminate downstream areas if runoff water from heavy rains carried the reaction products or tailings solids further downstream.

Boliden finished its remediation before significant rains began (Figures 8, 9), and removed roughly 4-5 Mm3 of soil and tailings (about 4-5 times more than original tailings solids) due to the necessity of removing underlying and adjacent soils which tailings solids or tailings water had contaminated (Eriksson, personal communication, 1999). This material was returned to the minesite and placed in the mined-out Aznalcóllar Pit (Sassoon, 1998).

Sampling and re-sampling of soils along the river system were used to ensure proper remediation of virtually all tailings-contaminated areas. Metals like copper and zinc in the river-area soils are now below remediation targets in most areas. Only arsenic remains above its target in some places (Adamer, personal communication, 1999), due to the original, very high arsenic content of the tailings.

The Aznalcóllar tailings impoundment is now closed out. A multilayer cover has been placed over the tailings (Figure 10), and a slurry/plastic cutoff wall is installed around the perimeter of the impoundment. Additional tailings from the Los Frailes ore was placed in the mined-out Aznalcóllar Pit along with the recovered tailings and soil. The mine is now closed.

Figure B: Staining on downstream structures (7 years after failure)

For official purposes and permission to use on www.tailings.info site only: